You can find on this page the Brussels old map to print and to download in PDF. The Brussels historical map and the vintage map of Brussels present the past and evolutions of the city of Brussels in Belgium.
At the end of the sixth century, the Preacher Saint Gorik built a chapel on a small old island formed by the two arms of the river Senne, creating the first building known to have been built in Brussels (see Brussels old map). 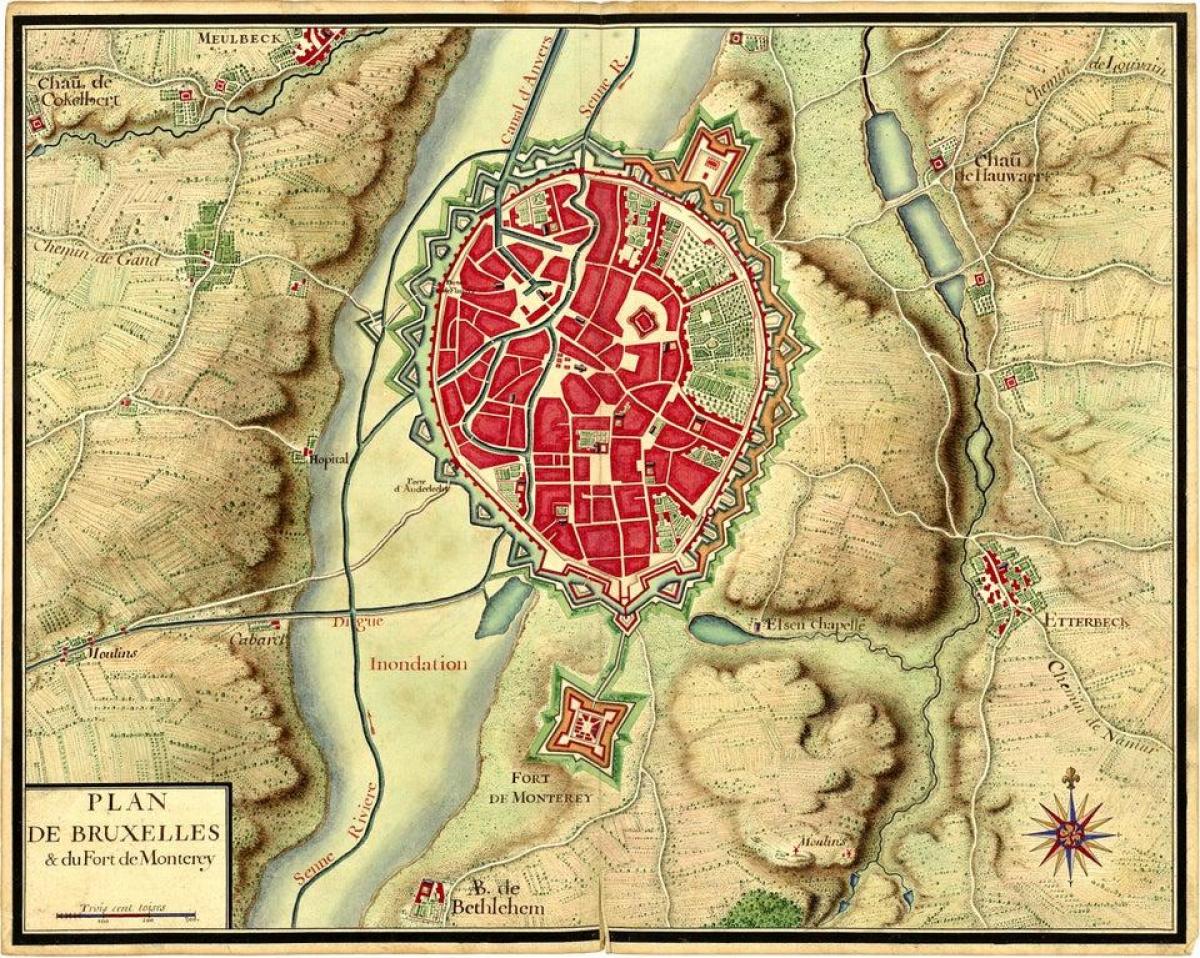 The Brussels old map shows evolutions of Brussels city. This historical map of Brussels will allow you to travel in the past and in the history of Brussels in Belgium. The Brussels ancient map is downloadable in PDF, printable and free.

The founding of the historical Brussels dates back to around 979 when Duke Charles passed on the relics of Saint Gudula from Moorsel to the Saint Gaugericus chapel in Brussels. Today the historical chapel is located on the holy island of Saint Gaugericus as its shown in Brussels historical map. On this same very island Charles of France; the expelled son of King Louis IV built the first permanent fortification when The Holy Roman Emperor Otto II gave the duchy of Lower Lotharingia to him. In those days Saint Gaugericus island was recognised as the Island of Saint-Gorik. Carl of France decided to build a castrum on the island which laid the foundation of Brussels city.

The Monterey fort was a historical Brussels citadel built in 1672 and dismantled in the 18th century. It completed the fortifications of the Second Wall of Brussels, which had become insufficient. Its last vestiges disappeared in 1860. Its existence is still evoked through the names Rue du Fort and Rue des Fortifications of the current municipality of Saint-Gilles (see Brussels historical map).

The historical fort of Montereÿ was built as a barrier on the 'path' linking Brussels to Uccle as its mentioned in Brussels historical map. A new path bypassing the fort appeared, corresponding to the present chaussée de Forest. The historical fort, like all the fortifications of Brussels, was dismantled at the end of the 18th century. 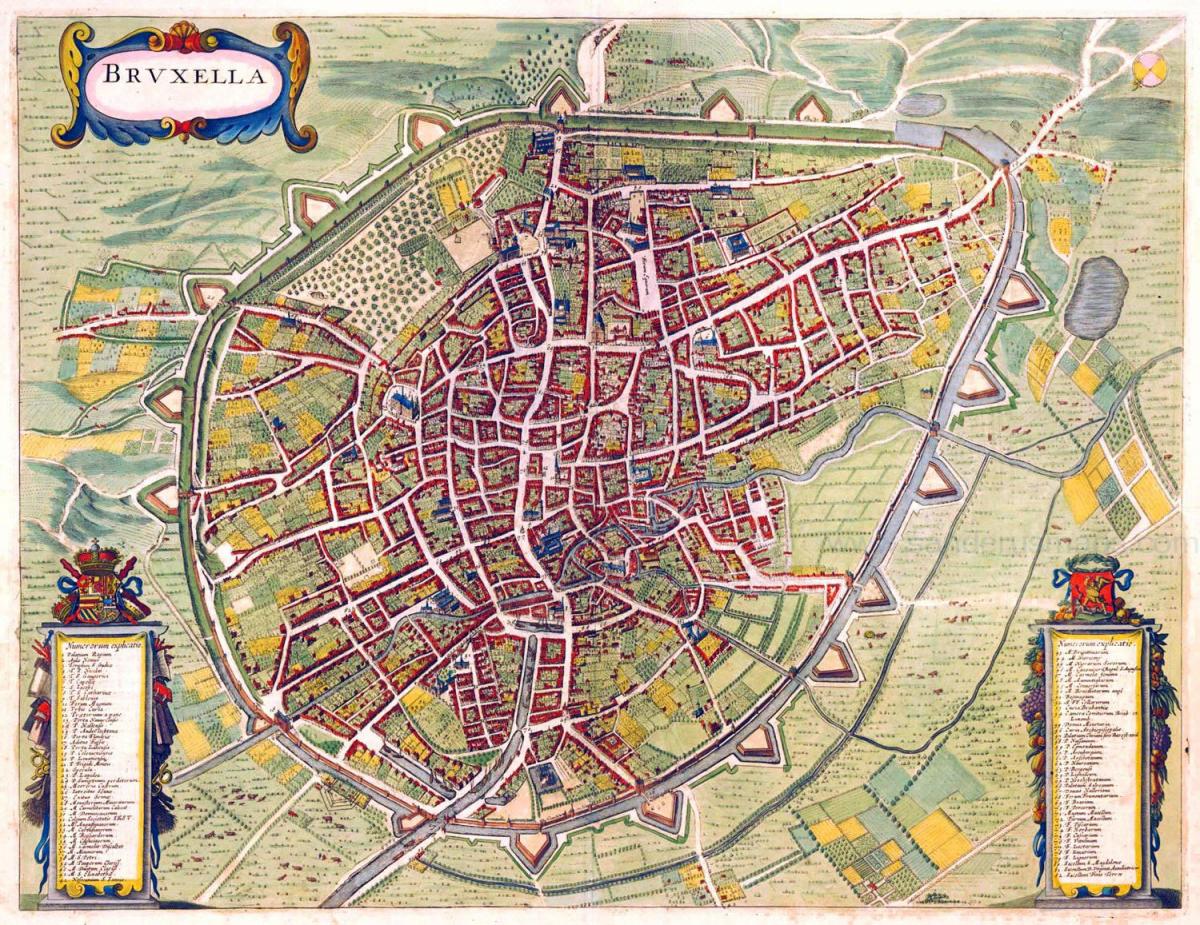 The vintage city of Brussels has evolved several times but to this day you can still see the original city walls. Throughout the ages vintage Brussels has been the home of kings, a trade hub and an epicentre of many crafts as its shown in Brussels vintage map. The most common theory for the toponymy of Brussels is that it derives from the Old Dutch Broeksel or other spelling variants, which means marsh (broek) and home (sel) or "home in the marsh".

Vintage Belgium became an independent state in 1830 after protests against the policies of King William of Netherlands. Since then, Belgium has created its own Constitution and proclaimed its own sovereignity. King Leopold of Saxe-Coburg was the first king of the Kingdom of Belgium. The origin of the settlement that was to become Brussels lies in Saint Gaugericus construction of a chapel on an island in the river Senne around 580 (see Brussels vintage map).

In 1695, King Louis XIV of France sent troops to bombard Brussels with artillery. Together with the resulting fire, it was the most destructive event in the entire history of vintage Brussels. The Grand Place was destroyed, along with 4000 buildings, a third of those in the vintage city as you can see in Brussels vintage map. The reconstruction of the city centre, effected during subsequent years, profoundly changed the appearance of the city and left numerous traces still visible today. Brussels was captured by France in 1746 during the War of the Austrian Succession but was handed back to Austria three years later.